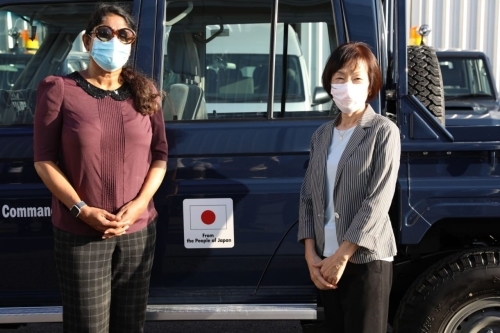 Malé, April 28, 2021 – Ambassador of Japan to Maldives Her Excellency Keiko Yanai handed over forty two (42) vehicles ranging from Sedan to heavy duty SUV to the Minister of Defence, Her Excellency Uza. Mariya Ahmed Didi at a ceremony held at the Velana International Airport on today. In addition to these vehicles, equipment such as mobile X-ray inspection sets, liquid scanners, hand-held metal detectors, radios and cameras have been procured under this grant and the shipment is due to arrive in Maldives soon.

This assistance is based on the Exchange of Notes signed between the Government of Japan and the Government of Maldives in October 2019 under the ‘Economic and Social Development Programme’. Under the grant, five hundred million Japanese Yen (¥ 500,000,000), (approximately 4.5 million USD) was committed to the Aviation Security Command and Maldives National Defence Force to strengthen security at all the international and domestic airports across the Maldives and to intensify the on-going efforts of the Government of Maldives on counterterrorism.

The Government of Japan hopes the grant assistance will greatly enhance public safety and security in Maldives, thereby contributing to secure economic and social development.