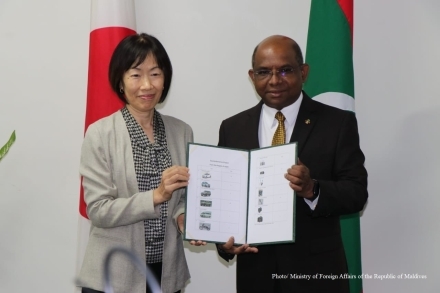 In October, the Government of Japan extended to the Government of Maldives, a grant of 500 million Japanese Yen (approximately 4.5 million USD) for further promoting the economic and social development of the Maldives. The grant is utilized towards countering terrorism. H.E. Ms. Yanai Keiko, Ambassador of Japan to Maldives, and H.E. Mr. Abdulla Shahid, Minister of Foreign Affairs, signed the Exchange of Notes on behalf of the two countries.
On the 18th of December, the Government of Japan in consultation with the Government of Maldives has finalised the components of the grant. The equipment procured under the grant consists of 13 items and will be utilized to enhance security at all the international and domestic airports in the Maldives. The equipment includes;
1. Liquid scanner (5)
2. Mobile X-ray scanner (4)
3. Handheld metal detector (20)
4. Hand radio (185)
5. Radio for automobile or base (16)
6. Full-frame mirrorless camera (3) and DSLR camera (2)
7. Vehicles ranging from sedan to 4WD heavy duty SUV (44)
During the press information sharing session held today at the Ministry of Foreign Affairs, the Ambassador of Japan to the Maldives, Her Excellency Ms. Yanai Keiko presented the list of the equipment to the Minister of Foreign Affairs, His Excellency Mr. Abdulla Shahid. The session was witnessed by the Ambassador of Maldives to Japan, His Excellency Mr. Ibrahim Uvais.
The President of the Republic of Maldives, His Excellency Ibrahim Mohamed Solih visited Japan and met with the Japanese Prime Minister, ABE Shinzo at a summit meeting held in Tokyo last October. Prime Minister ABE announced the grant decision with a view to further developing cooperative relations between the two countries.