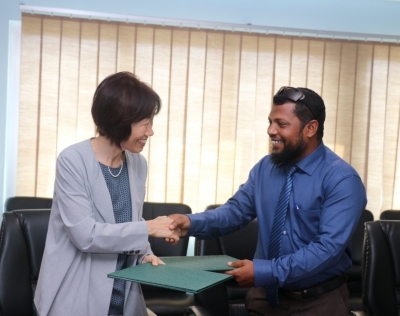 Malé, February 19, 2019 The Government of Japan has provided a grant for “The Project for Construction of Rathafandhoo School Building in Gaafu Dhaalu Atoll” (which is equivalent to USD 81,757) under its Grant Assistance for Grassroots Human Security Project (GGP) scheme.

The Grant Contract was signed between Her Excellency Ms. Keiko YANAI, Ambassador of Japan to Maldives and Mr. Mohamed Abdulla, Principal of Rathafandhoo School at a ceremony held in Ministry of Education this morning.

The Project for “Construction of Rathafandhoo School Building in Gaafu Dhaalu Atoll” will be implemented by Rathafandhoo School. The project aims to construct 2 class room facilities in the school to cater the increasing student population in the island and to address the issue of classroom shortages for the existing 103 students. The project is foreseen to be completed within a year and, after completion the school would have a permanent step-up for a science laboratory and would be able to conduct more extra-curricular activities for the students.

The Government and people of Japan has extended assistance to Maldives for over 50 years in various sectors ranging from grass root level to large infrasture projects.